What a crappy watch this was! Mechanical difficulties with our brand new generator, that had only 8 hours of service on it.

This issue made dinner super late, so late that only one person ate dinner and it was one of my favorites as in Tuna Noodle (a dish I had only discovered over the last 2 years and Rod makes for me on a pretty regular basis). However, tonight I had no broth so I used beer, the boat tipped and a glass jar went flying and broke (you aren’t even supposed to have glass on a boat for reasons such as this). But at least, Stephen decided he was going to have some dinner and he ate quite a bit. Have no idea where that guy puts all the food, I’m starting to think he’s a sailor with a hollow leg. Rod wasn’t feeling that hot so didn’t really want to eat and turned in, and Bruce ended up going to bed since he had the 10 pm shift, it was already after 7, and he needed to get some sleep.

So then my watch begins and the boat is supposed to zig and she zags, the wind could not figure out at all where she wanted to blow, but I think it was more that Cracker Jack couldn’t find the wind, or I’m not a good enough sailor to help her. The watch and the wind ended up being very flukey.

Beyond mechanical difficulties, lousy timing on the meal, zero winds and semi-rough day sailing, I decided to share a photo that many guys cannot relate to whatsoever. But, ladies, trust me when the boat is heeled over at 25-40º ‘s it makes life sitting on a small toilet while bracing oneself so one does not fall off, going potty is extremely difficult. As shown below….

OK, so for a $10 Starbucks Card, which hand did I let go to grab the toilet paper? Email Rod at rod@crackerjacklife.com and simply put in Subject Line Left or Right. Give me your email address please and I’ll send it electronically, while supplies last!

Dinner was Tuna Noodle for the second time—remember Watch #5, due to mechanical issue, Tuna Noodle came out late and only one person ate, rest of crew didn’t feel like eating—however tonight we are really cooking, in more ways than one! Rod had the watch before me and he was moving at 8.6 knots through the water (now remember this is a sail boat, most people jog faster than a sailboat sails). Right after Rod went down from his shift Cracker Jack slowed to 7.6, but still we were moving closer and closer to the USVI’s.

Today’s sailing was absolutely fantastic, we had another lazy day on the boat, reading, napping or simply staring out into space, who cares, we aren’t going to get there any faster, Cracker Jack and Mother Nature are in control and we are not.

Culinary wise, I had a good day, made egg tortillas in the morning and for lunch got the boys to go vegan with hummus/black beans/avocados and salsa all smooshed together and then spread on a couple of wraps (OMG! I feel like one of those posts that I hate, where people show me the “muffins” they made for breakfast, what have I become?). 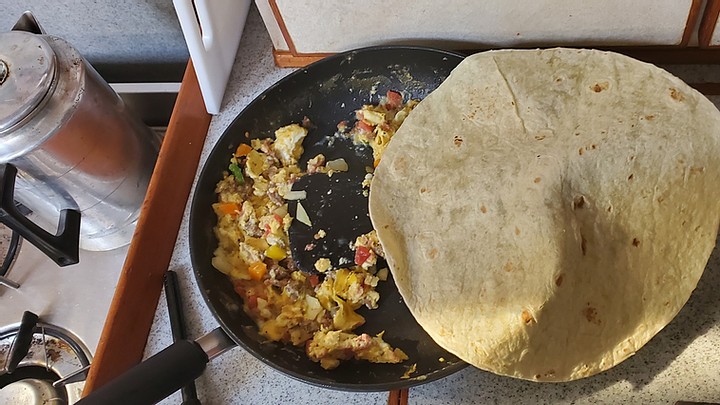 We have been on the boat now for nearly a week and it was time for me to assess the damage, to my body that is. The tossing around from side to side and then as the boat pivots forward and back is normal for Cracker Jack, but for her crew…not so much. While the gents may be too much on the macho side to whine about their “OWIES” I’m certainly not – A) Burnt forearm from oven not gimballing properly; B) Dalmatian hips and buttocks from trying to walk from one side of boat to the other and hitting all the wooden corners on tables, counters, etc. C) Lumps on head from slipping and hitting face on door and then from falling backwards in birth where head met Mr. Cupboard….oh and did I say Life was better on a Boat (what was I thinking?)!